You are here:
Industrial marking equipmentApplications and solutions

Miniaturisation in electronics is part of everyday life experience - but is it possible to print 3 pages of text on an area of 3 square centimetres?

This is logically conceivable in coded form, as binary information in a Data Matrix code. Yet it is only with the REINER jetStamp® printers that it becomes mobile!

For many years, REINER® mobile inkjet printers have been combining a Data Matrix generator and printer in a reliable, handy device. This offers a number of special features for Data Matrix code applications in industry and logistics:

• Print images can be transferred to the device via the supplied “PCset graphic” software or Windows based programmes such as Word, Excel or via a barcode label software or ERP system.

• Time saving due to fast print and transfer times

• Reliable marking and traceability in individual and series production

What is so special about the 2D Data Matrix code structure?

Since its introduction in the 1970s, the one-dimensional barcode has established itself worldwide on products and packaging. This barcode was thus the predecessor of further, and above all more powerful, graphically represented data. What all graphic data packets have in common is that they are easily scanned with an optical reader and immediately processed by computer. However, the degree of reliability depends on the print quality of the barcode on the product, but also on its legibility in the event of contamination or abrasion. We sometimes notice that the EAN barcode has some weak points here, when the reader at the end of the checkout belt refuses the successful "beep", because of longer waiting times at the supermarket checkout.

In the 1980s, a significant further development was achieved by encoding binary information not only one-dimensionally as a series of bars. The two-dimensional representation as square or rectangular "chessboard pattern" enormously expanded the storage capacity. This not only makes the Data Matrix code much more compact, but also more informative and robust. The data is coded as black and white boxes or as dots with gaps. This uniform symbol size makes reading the image for a scanner and subsequent decoding much safer.

In addition, the inventors of the DMC code have implemented a procedure for error correction which, with the help of the so-called "Reed-Solomon-Code", also enables the correct reading of a matrix code which is partially destroyed. The causes of such errors are quite common, e.g. scratches or soiling during the transport of packaging.

A further advantage is the lower demands on the black-and-white contrast between the screen areas: a barcode needs a contrast of 80% for a reliable readability by the scanner - with the Data Matrix code this is already possible with a brightness difference of 20%.
Today, 2D Data Matrix codes have established themselves as important identifiers for production control and administration, particularly in the industrial sector and warehousing, but also in postal dispatch and on tickets such as railroad tickets.

What does the Data Matrix code structure look like?

The fixed boundary lines on the left and bottom serve to delimit and "straighten up" the reading scanner or the connected image processing software. In this example (using the widely used ECC200 standard), an even number of rows or columns is displayed at the top and right margin. In everyday life, the reader is rarely directed exactly at right angles to the 2D matrix code from above, but diagonally and twisted, which can lead to the following image.

With the help of the boundary lines, the scanner software is able to "erect" the image again and correctly read out the actual data content - the matrix. The matrix size can range from 10x10 to 144x144 squares. The largest version of the matrix is capable of encoding up to 3116 numbers or 2335 ASCII characters.
The square DMC is visually similar to the QR Code (Quick Response Code), which is usually read with smartphones to call up websites, business cards or short text information.

Where is the Data Matrix code used?

Its compact dimensions make the data matrix code a popular digital coding method. It can be found on printed circuit boards, medical products, tools, chemical or biometric analysis devices and even on envelopes and small packages to replace stamps.

In industrial production, the Data Matrix code enables semi- or fully automatic communication between the component and the processing machine, as well as complete documentation of the processing of all important individual parts into a product.

In logistics, the 2D Data Matrix code is particularly popular due to its robustness and storage capacity. When moving, loading and transporting packaging, abrasion and soiling are often unavoidable. The relatively high fault tolerance of the widely used Datamatrix ECC 200 nevertheless ensures secure information transmission.

Another advantage of the Data Matrix code structure is that it cannot be read by humans without scanners and software. It is therefore also suitable for storing discrete information in coded form, e.g. on letters, documents, stamp cards, personnel files, incoming goods checks.

What Data Matrix types are there?

ECC200 Datamatrix
Since the introduction of the two-dimensional data matrix code, the numerous development stages have been named primarily according to the method used for error correction. It started with the variant Error Correction Code 00 and led to the current standard ECC220. The International Organization for Standardization ISO defines the Datamatrix in ISO/IEC 16022:2006. The module size, i.e. the number of rows and columns of the 2D code, can be freely selected between 10x10 and 144x144, rectangular shapes are also permitted.
Various character sets are available for printing the binary information in coded form, ranging from pure numbers and ASCII codes to ISO/Windows codes and UTF-8.

Do I need a Data Matrix Code generator for a REINER® marking device?

The supplied REINER® PCset graphic software includes a DMC generator. With a few mouse clicks you can create the Datamatrix code and transfer it to the REINER jetStamp® models via Bluetooth or USB interface.

Are Data Matrix Code labels suitable for professional everyday use or is it possible to print the DMC code directly onto a product?

Labels have many disadvantages. They are complex to use and require at least three work steps: 1. Printing the labels, 2. detaching it from the label carrier and 3. applying it precisely to the object. Self-adhesive labels may peel off or become illegible, especially in humid environments. The design and printing of the labels is also very complex and may impair the product image.

The mobile REINER® marking devices are a smart alternative and generate the Data Matrix code at the click of a mouse using the supplied PC graphic set.
Now just place the device and apply the data matrix code to the goods at the push of a button - done!

How can I print a Data Matrix code on metal, steel, glass and plastic?

A common minimum size for a dot within the Datamatrix is 0.2 mm for direct inscription by an inkjet printer. This is where the REINER jetStamp® models come into their own. Such small matrices can be printed particularly well and cleanly on smooth, non-absorbent surfaces.
For particularly smooth surfaces, REINER® has developed a quick drying ink that remains water and smudge-proof immediately after printing. The innovative technology of the handheld inkjet printer jetStamp® 1025 ensures an airtight closing of the ink nozzles when not in use. This prevents them from drying out and keeps these mobile marking devices functional at all times, even during long interruptions. 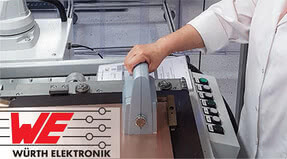 Marking of PCBs - DataMatrixCode and Text

Würth Elektronik GmbH & Co. KG is a leading manufacturer of PCBs in Europe.

The imprint, comprising a machine-readable DataMatrixCode and the batch ident no. in plain text, permits a reliable labelling solution that is visible and unique at all times. 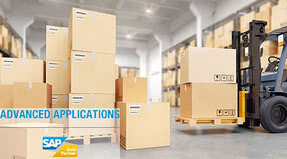 Finding the right connection is important, especially when it comes to the smooth and fast transfer of data in processes. In marking, the focus is on mobility and coupling with the leading systems and their data.

In order to find the best solution for data transfer from SAP directly to the REINER® marking devices, Ernst REINER® works closely together with the specialists from Advanced Applications. 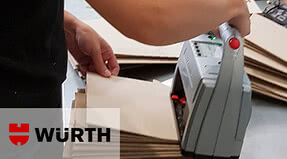 Würth relies on packaging marking with the jetStamp® 1025

The Bulgarian capital city of Sofia is the home of a Würth logistics centre where bulk goods packages are used to sort small parts coming right from production, such as screw nuts, and portion them for customers and trade. For this, the goods are packed in boxes compliant with trade needs.

An intact logistics chain requires precise marking of the packaging.